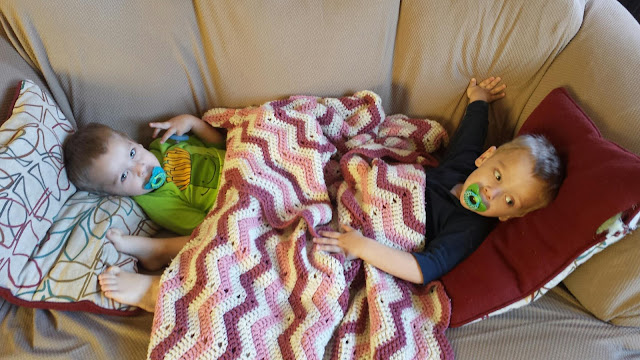 From time to time, my wife will be introduced to someone who is expecting twins and will try to give them an idea of the day to day of having twins.  I recently overheard one of these conversations.  My wife was giving the usual when all I could think of to say to the woman on phone would have been "Get ready bitch, twins are like a juggling bear on a unicycle...real cute but once that bear falls off and is hungry and pissed off its all on you to figure out how to get his big ass back up on that silly one wheeled bike!"
I suppose there are some practical tidbits that are useful to a new parent of twins.  One would be how to handle diapers.  If you're super ambitious I would imagine you could use cotton diapers but in my opinion this would be a mistake.  The amount of laundry twins produce on top of the amount of diapers that you would have to wash every day would mean that your own clothes would go unwashed and you yourself would wind up looking like a hobo with a bindle of shitty diapers that need to be run through the washing machine twice just to make them descent.  It's hard enough getting all the laundry done do yourself a favor and use disposable diapers.  Changing them both at the same time is a good idea because usually they will be wet at the same time.  If you are unsure if one has a dirty diaper don't waste your time taking the clothes and diaper off.  Simply pick up the child in question, put your nose in the small of his back, and take a whiff like Charlie Sheen snorting a line of blow off a stripper's ass and you will know for sure if said child needs a fresh diaper.  I'd go with the cheapest diapers that will do the job because Pampers may be well marketed but diapers from Aldi will perform about the same and cost half as much.  Parents of twins should get their Aldi on as much as possible.
It's very important to get them to take a nap at the same time.  Not only as a practical matter but you'll find you need some time to clean up and have some general quiet time for yourself.  Do whatever is necessary to make this happen.  Give them there bottles, pacifiers, stuffed animals, anything!  There's nothing worse than opening their door at nap time to wide-eyed twins who haven't slept and the room smells like farts and broken dreams.  Let them cry it out if you must just get those little clowns to sleep.
It's a good idea to have a vehicle that's big enough that none of your kids can touch each other.  The last thing you need is them stealing each others binky or wiping boogers on each others forehead while you're driving down the freeway.  Have some music they enjoy and toys to keep them busy.
The most important thing to remember is you're going to get frustrated and no matter what don't take it out on your spouse.  I've heard of more than one couple getting divorced after having twins.  Though it may feel good to set your significant other on fire after a day of getting vomited on and straightening up the house seven times, it solves nothing.  They are stressed out too and you need to be a team to keep those lookalikes alive.  Make sure to communicate, laugh together and let the other person cry on your shoulder when they need to.   Like us on Facebook at Badtwindad and on twitter @Badtwindad.