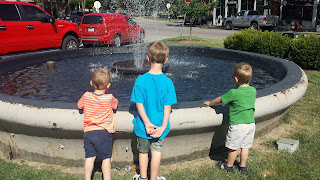 We had cleaned the house the day before as well as packed our bags.  The car was ready.  Plans made.  Diapers changed.  Yes everything was in order.  Everything except one piece of clothing was still drying in the dryer which we needed to toss in the suitcase before leaving.  Not a big deal really, but while waiting for what seemed like an eternity, the children were starting to get out their toys, toss pillows on the ground, race around the house farting and giggling all over the place and generally making the house look like a homeless shelter.  You see this weekend has been a beacon of light on our calendar for about a month and a half.  For our anniversary, a night in a fancy hotel without the children, who are also excited to spend the night with their grandparents, and then dinner at a highly touted burger joint with the in-laws and the kids on Fathers Day to put a bow on the whole weekend.  DING DING.  Dryer was finished.  We quickly cleaned up the mess and piled in the car.  It's about an hour and a half drive to my parents house.  It goes by pretty quick with all the "are we there yets", missing pacifiers and endless questions about Star Wars from a four year old who has never even seen one Star Wars movie.  We finally arrived with three excited little boys who couldn't wait to play in the creek and go for endless rides on a John Deere Gator.  So just as soon as my mother noticed Henry's dirty diaper we were off "We out Nana, that's your problem!"  I won't bore you with the fun my lovely wife and I had without our crew of little gangsters for twenty four hours.  Long story short we had a nice lunch, hung out in a neighborhood we hope to make our own one day, laid around in a luxury hotel, had a fantastic breakfast and spent the rest of the morning at Ikea browsing and listening to couples argue about what color their duvet covers should be.  Have a meatball and relax you assholes, am I right?  It was AMAZING!  After going back to pick the kids up, they quickly fell asleep in the car which was ideal because after having all that fun they were crabby and looking for someone to pay for it.  We had about an hour drive to the restaurant and they napped the whole way.  They were little angels at the table....for the first five minutes.  Oliver discovered he would rather sit on the floor under the table than in his chair and Henry wouldn't release his mother from his tiny hands.  I managed to get Oliver in my lap but this only caused Henry to want the same spot as Oliver.  So with both of them in my lap my wife moved to take Henry for a little walk while we waited for the food which Oliver also tagged along for.  It was going OK until Oliver tried to climb up in a strangers lap that he thought was mine.  His tears were only matched by his kicking and screaming.  We had to go outside to see the fountain to calm down.  Now this burger joint is incredible, but the neighborhood it's in is not.  Don't get me wrong the neighborhood is on the come up, but is starting its rise from the bottom.   Luckily the fountain kept them out of the street.  We decided I would go eat my burger, it being fathers day, while she watched them and then we would switch.  I didn't want her food to get cold so I really gave that burger hell, just went after it like a wolverine. like a Kobayashi at the Nathan's Coney Island Hot Dog eating contest.  Google it ya fucks.  So I ran out there and switched with my wife who handed me the pacifiers which I gave to the twins.  They were having an awesome time dipping shit in the fountain, splashing, laughing and running around in circles.  Meanwhile a local of the neighborhood brought her dog to have his evening dump in the grass right next to our fountain....and did not pick it up.  Yeah thanks bitch, can't you see the deuces wild playing right next to the steaming pile of dog shit your mongrel just squatted over?  Needless to say we stayed away from that side for the remainder.  By the time everyone was finished, the twins were soaked with chlorine infused water from head to toe and were as crabby as a couple of prisoners on sloppy joe day.  I have to hand it to Jack he really behaved himself like a gentleman but "the brothers" as he calls them had some room for improvement.  Maybe it was our fault for thinking they could handle it after such a busy weekend.  Happy Fathers Day to all the dads out there doing your best for your family and Happy Anniversary to my beautiful wife Abby.  Like us on Facebook at BadTwinDad and follow us on Twitter @BadTwinDad
Posted by BadTwinDad at 7:58 PM No comments: