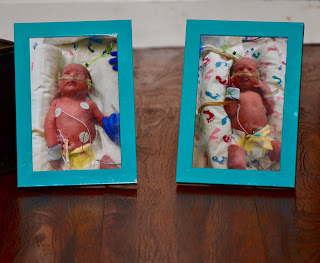 There's a lot to be thankful for running around on two legs in this house.  Despite all of my low brow jokes, and some of my above brow ones,  I really am thankful for these two hellraisers.  It is most certainly a miracle that they are here.  You see they are mono mono twins which means one placenta and one amniotic sack.  Nothing separated them and their umbilical cords for nine months which means the cords were free to be tied in knots that could have easily killed one or both of them.  The cords actually looked like a preschooler's attempt at tying shoes but didn't cause complications until they were ready to come out.  Something to be thankful for.  Another thing to be thankful for is that if the embryo had split even one day later they would be conjoined twins.  Think about how hard they would be to get to sleep then, it boggles the mind!  Being mono mono, they were in danger at all times which means once they were viable at 25 weeks, my wife was admitted to the hospital for a lengthy stay.  You can imagine the size of the wrench that was thrown in the works of our everyday lives once she was confined to a hospital bed.  She had to leave a not even two year old little boy at home and me.  I did my best with Jack at home during the week taking him to daycare twice a week which usually meant both of us were crying by 7:15 in the morning and his grandmother watched him the other 3 days which they usually spent at the hospital with Abby.  I took him to see her every Saturday and Sunday which usually involved wheel chair rides on Abby's lap and horrible cafeteria food that was as bland as a cardboard box.  Jack stayed pretty strong during the more than two months that my better half spent in the hospital.  Our drives home from the hospital usually had me reaching for his little hand in the back seat because I needed his support to keep up my moral.  I'm thankful for Jack and his grandma who took perfect care of him during the whole ordeal.  I'm also thankful for everyone who visited Abby in the hospital during her stay.  There weren't many days that someone didn't drop by to keep her company and tell her the latest gossip from the Mom's Club or bring her some descent food or even stay the night with her.  You all now who you are and we appreciate you!  There are others: the doctors, the nurses, the greeter in the lobby of the hospital.  All made a big difference.  I guess the person I'm most thankful for is my wife Abby.  I tell her all the time and it's true, she's a badass!  Even though she broke down a few times, so did I!, she kept going through all the monitoring sessions, tests, ultrasounds and prodding and poking and she brought into this world two of the cutest, funniest, smartest and no sleepingest twins this world has ever known.  there was no stopping her!  She made a giant calender on the hospital room wall counting down the days.  I could barely find my way through each day and she had her eye on the prize the whole time.  Even when we would get some bad news like "Oh by the way, they could die at any time" or "One could basically eat the other" or "It's shitty hot dog day in the cafeteria" she might cry a little but I could always see the strength inside of her that only really good mom's posses.  I could feel it coming off of her and you could just see in her eyes "Molon labe" which is Greek for "Come and Take them".  Wasn't nobody gettin through this badass bitch to those little boys!  And so she made it, we all did.  And on Thanksgiving our family shared a full spread of turkey and all the fixings in a deserted corner of the hospital just outside the NICU.  It was the best thanksgiving ever and this thanksgiving we will be celebrating Henry and Oliver's 2nd birthday and we are just as thankful as the day they were born.  Like us on facebook at BadTwinDad and on Twitter @BadTwinDad.
Posted by BadTwinDad at 8:48 PM No comments: