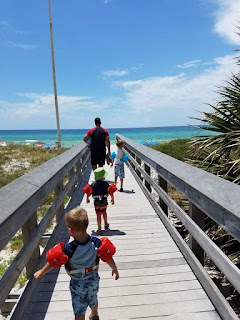 Nothing is as magical as seeing the beach for the first time.  The endless water, the sand, the waves breaking, shells, all of these things combine to form an experience that you will never forget.  I myself went to the beach for the first time at 28 years old and should have been there 27 years sooner.  My wife and I couldn't wait to see the look on the boys' faces when they laid eyes upon it, but we would have to because it took 14 grueling hours to drive there.  We set out around ten at night.  The time of night when we are usually settling into bed we started a 775 mile journey with 3 little kids and a thermos full of coffee.  Every one's excitement was evident as we hit the highway.  Henry and Oliver were telling jokes to each other by simply yelling "Joke!" at each other and laughing like hyenas and Jack was focused intently on the headlight lit road ahead searching for a glimpse of the ocean that was still 700 miles away.  Eventually they gave in fell asleep one by one.  For at least an hour all was quiet until Henry woke up, didn't know where he was, got upset......and threw up at 1:30 in the morning with about 10 hours left to go.  Luckily a weigh station wasn't far away.  We stopped to clean him up and calm him down, by this time everyone else was awake.  I don't know how you react when your twin is upset, but Oliver took one look at Henry and in solidarity started crying and immediately threw up as well.  They are like deer in the wild, if one raises the alarm, all follow suit no matter if the danger is seen or not.  Luckily Abby caught Oliver's half digested dinner in the blanket he had over him.  After half a pack of wipes, some calming words and a pull off the coffee thermos, we were back on the road.  Our next stop was for gas in rural Tennessee  around 2am.  The caliber of folks at this establishment was top notch.  Tattoos, ripped clothing, meth induced twitching, bloodshot eyes.....fantastic.  If I were to describe the inhabitants of the gas station in one word it would be dirt.  One young lady whose look I would describe as jaw droppingly awful was showing more side boob than Kim Kardashian at the Grammys.  I don't think she knew or cared that she was even wearing a shirt.  My wife was past the point of hiding her disgust as we drove off into the night.  The small hours of the morning had to be the hardest for me as my body was attempting to shut down while driving.  At one point a blink of my eyes had me into the rumble strip along the side of the road but at that moment I looked to the east and knew I would make it as a slight glow had started at the horizon.  We stopped for breakfast around 7 in Alabama and continued on south for the beaches of Florida.  The rest of the drive was uneventful and we reached our destination around 12:30.  Now we couldn't get into our accommodations until 4 but after that long in the car there was only one place we wanted to go....the beach!  We found a public beach and changed our clothes and headed for the water barely stopping for sunscreen.  The giggles and shrieks of happiness made the long arduous drive well worth it.  We played on that beach for hours despite our exhaustion and I have to admit my own happiness was exhibited by the 100 dollar smile on my face the entire time.
In total we spent 6 days at the beach staying with my wife's extended family.  We went to several attractions, had delicious meals and got some much needed relaxation.  Of course sleeping with this crew is always a disaster.  Our last night there Henry had a considerable amount of trouble sleeping which meant the rest of us did too as the five of us were in the same room.  Abby said she thought his tummy hurt because she heard him farting several times throughout the night.  Seemed reasonable.  One of the most exciting parts of the trip was when my mother in law came rushing up the steps to exclaim that she had found poop on the bathroom floor.  Abby and I sprang into action sniffing butts and looking down pants but to our surprise Henry and Oliver were not the culprits.  I wondered down to our room to find Jack trying to lock himself in and clean himself up.  I saw right away he was embarrassed.  Kid just didn't make it to the toilet in time that's all.  He asked me if this had happened to me before and I said "Sure man this sort of thing has happened to everyone.  Just last night I was farting in my sleep all night and woke up Henry several times in the process.  You want to know what the worst part is?  I let him take the fall for it.  Now lets clean this shit up literally and go home."  That's right I'm an asshole.  Who knows, Henry might have been farting in his sleep too for all the pizza we had the night before.  We cleaned up Jack's accident, packed the car and hit the road.  Everyone agreed that we should meet up at the same beach next summer and after the rejuvenation of the soul that the beach provides, I would have to agree.  Like and share on Facebook at BadTwinDad and follow us on Twitter @BadTwinDad
Posted by BadTwinDad at 12:36 PM No comments: