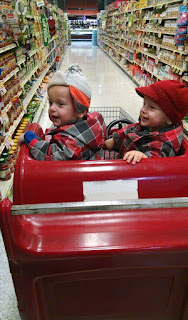 A trip to the grocery store is always a stressful experience when you have two or more children in tow and can result in a little sweat on the brow on a good day or a carton of eggs on the floor on the worst of days.  In China, Kung Fu refers to any skill learned through practice and if you've ever pushed a cart through the isles with doppelgangers riding shotgun you know it's not a skill that comes easy.  For starters if the children in question are not well rested and fed, they are going to get irritated after the first 5 minutes and start poking and prodding each other and before you know it you have a battle royal on your hands.  You don't want one punching the others hat off his head before you've even gotten out of the produce section.  Another thing to consider is the cart selection at the store you've chosen.  Do they have enough race car carts?  You don't want some singleton parent putting little Johnny in the only cart capable of holding 2 kids.  If you're reading this and you have one kid who rides said cart, you have some soul searching to do. Two steering wheels is a must or they will be throwing grapes before you know it!  Your list has to be on point.  Sorted in categories for each section of the store in the order.  Speed is key.  This is bigger than you might think but if you can get out of the store 5 minutes faster you might be able to avoid two kids that look the same throwing grocery items that look nothing alike.  Quickness is also a factor when thinking about diaper changes.  You don't want to have to change a crouching tiger shitting dragon at the grocery store.  The other twin might decide to work on his flying knees off the top of the grocery cart.  Another area where your Kung Fu must be strong is when some ass hole comes up to you to let you know how they know about twins from their cousin's former roommate's sister who saw twins at the airport bathroom once getting their diapers changed or some bullshit.  First off, if this is you go fuck yourself.  Simple as.  Second of all, can't you see that one twin has toothpaste all over his face that I haven't paid for yet and the other is trying to pry open a tube of biscuits he's mistaken for tennis balls?  While you're going on about you're experience of seeing twins at a baseball game played by the Minnesota twins, my three year old who doesn't fit in the cart has run off a few isles down has lit up and started smoking.  Get over yourself and realize you're just making things harder for us.  The check out line has it's own dangers to look out for.  All the impulse items become targets for their curious fingers to grab and hurl at the customers behind you who will also be trying to tell you about how they know what you're going through because they saw a shitty movie about having two cats once and it can't be that much different than having twins.  After you've paid just run for your life and get the hell out of there!  Retreat to the safety of the dojo, which means get in your minivan where they will be strapped down and immobile.  Remember to practice your praying mantis style every chance you get!  Like us on facebook at BadTwinDad and follow us on Twitter @BadTwinDad.
Posted by BadTwinDad at 4:08 PM